Well, kind of a synchronicity I guess. Reading Thom Powell's Edges of Science (see post below) which arrived yesterday.

Wondering (if not hoping) if my dreams would involve Sasquatch (they didn't) I did wake up this morning to this news item/filler in the local paper: 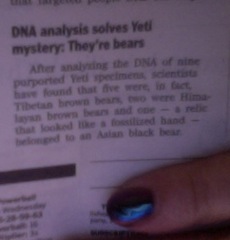 DNA analysis solves Yeti mystery: They're bears
After analyzing the DNA of nine purported Yeti specimens, scientists have found that five were, in fact, Tibetan brown bears, two were Himalayan brown bears and one -- a relics that looked like a fossilized hand -- belonged to an Asian black bear. (Register Guard, November 30, 2017)


No source as to who the scientists are or where the item came from. Just filler in the "Nation" section of the paper.

This is old news, especially the specimen that "looked like a fossilized hand."

The point is, the mystery of the Yeti has not been solved. Only that specimens brought in for analysis were not of a Yeti; not that the "mystery" of Yeti has been put to bed forever because now it's finally been debunked.

What was the point of this little item? Filler, sure. But why?

The little seed has been planted. Those who care at all with a whiff of doubt concerning the existence of Yeti/Sasquatch etc. will now feel vilified because they just read in the paper that the "mystery of the Yeti has been solved."

At school today, noticed a little boy running around in a tee shirt with a large Sasquatch silhouette and "Newport Sasquatch Society" or some such. I don't think that was it exactly, but it did have something to do with the Oregon coast.  (Newport is an Oregon coastal town.)

My copy of Thom Powell's Edges of Science arrived yesterday. I started reading right away and reluctantly put it down only because I had to get to sleep in order to be fresh and bright eyed for students the next day. So far, I 'm loving the book. Powell writes about interesting examples of dreams concerning Sasquatch from witnesses. More on that later.

The point is, Powell is of the "paranormal" school regarding Sasquatch, citing other researchers who also fall into this camp. The division is a strong one, bordering on down right vicious at times, but there are those who have experienced the "stranger side of Sasquatch" and aren't shy about sharing their theories.

I Knew I Should Have Brought My Phone!

A little synchronicity; the other day, right after I had posted my posts about Sasquatch, dreams and other Bigfoot related things, I took a walk. As I was putting on my coat I thought to myself: "I should bring my phone, (for the camera) you never know what you'll find."

But I'm not a phone person. I still have a land line. My cell phone is an off the rack, flip cover phone. One I rarely relate to; half the time I don't know where it is, or if it's charged. I'm old school, phone wise. I only carry my cell for emergencies, or, the convenience of its funky camera. When I remember.

So of course, as I'm walking, I walk by a truck parked on the street with a large yellow "Sasquatch Hunter" decal, complete with an image of Sasquatch, on its rear window.

Little synchronicities.
Posted by Regan Lee at 6:05 PM No comments:

When Bigfoot Crashed A UFO: A Crypto-Fairy Tale – Rune Soup

Came across this wonderful piece from Gordon White at Runesoup ("Magic. Culture. Paranormal.")  in the UK. The post is five years old. Here's an excerpt:

When Bigfoot Crashed A UFO: A Crypto-Fairy Tale – Rune Soup: Depending on whether you have looked into this before, you may or may not be aware that Bigfoot sightings frequently occur in conjunction with UFO sightings... sometimes they are even seen piloting disc-shaped objects. Now, unless Chewbacca is actually real -which would be eleven kinds of awesome- this further weakens the Extraterrestrial Hypothesis (ETH) as the source of UFO phenomena.

Bigfoot then, is best understood as another denizen of Magonia. And it is important to emphasize that an extradimensional origin does not automatically mean the being is non-physical. Whilst it is likely, for instance, that flying saucers are more Tardis and less USS Enterprise, they still show up every single day on radar all around the world and almost by definition that means at least some of them have to be physical. (How else do they generate a radar signal? That's the whole point of the technology.) (Rune Soup)

White is still blogging, he's published books, and has a podcast.
Posted by Regan Lee at 2:26 PM No comments:

I was surprised to find that some dream dictionaries -- which are both interesting as well as "to be read with a large grain of salt" --  include Bigfoot as a dream symbol. Here's one interpretation:

Dream Dictionary Bigfoot, Dreaming of Bigfoot: What it Means to see this Legendary Creature in your Dreams: When you can't get Bigfoot out of your mind when you are dreaming, then what this usually suggests is the idea that you want to be more elusive with your emotions. You feel as if you are too upfront with many aspects of yourself and it has hurt you in the past. Thus, you now strive to hide away your feelings on many subjects and try to keep your emotions from others in the hopes that you will not be made fun of for your beliefs. [More at horoscope.com]

This one is from Dreams.Metroeve.com:

BigfootTo dream of bigfoot represents shock or surprise that you are seeing something. You may be in disbelief that someone elusive has appeared in your life. It may also reflect situations or news that takes you by complete surprise. You are metaphorically pinching yourself or having trouble accepting something amazing that has happened. [link]

I like that one better than the first interpretation.

There's a defunct thread on Bigfoot Forums.com discussing Bigfoot dreams. Too bad this thread stopped; I think you can learn a lot more from people sharing their dreams and talking about them with each other than a single interpretation from a dream symbol site.
Posted by Regan Lee at 11:21 AM No comments:

Email ThisBlogThis!Share to TwitterShare to FacebookShare to Pinterest
Labels: dreams

Of Sasquatch and Trains

Yesterday I was thinking about all things Fortean; nothing specific, but thinking about all my blogs, and writing in this realm, and how I've been fairly quiet this past year. A few meager posts here and there but nothing big. My silence isn't due to boredom concerning these topics -- never that! But… not sure why.

I was also thinking about my recurring dreams about trains (getting stuck, time to leave, can't find the ticket, etc.) Suddenly the phrase "Trains and Sasquatch" popped in my head and I thought: "Where did that come from?"

Last night I had the following dream. (No, wait! Come back!)

I'm in a cozy rustic A-frame cabin in the woods. With my spouse and a few friends. They all go off into town for supplies. I stay here, to work on my writing.

I'm alone. Feels good. I'm sitting at the table, at my laptop, and suddenly, I feel the presence of Sasquatch. Several of them. They are here. I can't see them, but their combined energy is huge. Fills the entire room. I know they are just outside, among the trees, but they communicate telepathically and are here, in this room with me with their massive energy spirit.

I'm awed in the true sense of the word. A bit fearful, though not afraid exactly, and just overwhelmed by this gift, this visit, this experience.

They tell me to listen. Just listen. Don't ask so many questions of them. Don't force things. Don't' expect answers, or answers to some of my questions. In other words, simply because I asked doesn't mean they will address my question. It's not just me asking them -- it's them choosing to respond to me. As well as teach me.

The first thing is: stop, listen. Allow the silence to speak to me.

So I do. It is overwhelming, amazing. There is so much.

They are real. They are here. They have been here a very long time. And they are not human, nor are they alien. They are of this earth, this planet. But they are aware of aliens and have communicated with them; they have an understanding.
They are supernatural. They are physical. They come in and out of dimensions.

I have never seen a Sasquatch, and they tell me it doesn't matter, for I have communicated with them, and that is a type of seeing.
Later, I tell the others about this experience, and the people in the area. Most believe me. Some pretend they don't, only because they are not sure of my intentions regarding Sasquatch, but later acknowledge they believe they exist.

I haven't seen a Sasquatch, though I have had a couple of interesting experiences about Sasquatch, as well as synchronicities both in waking life and the dream world.

The debate about Sasquatch being a supernatural (cryptid) being, alien, or simply a flesh and blood animal continues. But I'm convinced (fairly) that not only is Sasquatch real, but transcends the mundane flesh and blood explanation.