Rabid From the Ukraine to Maine 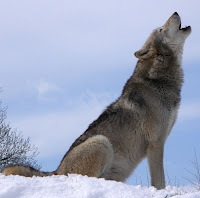 A couple of strange items found on Rense.com... one about a rabid wolf attacking people on the “premises of the Chernobyl atomic power plant” in the Ukraine. Altogether, six people have been attacked by the rabid wolf.

My love for the wolf naturally drew me to this story, as well as the general Fortean weirdness of both this story and the strange events surrounding Chernobyl in general. (Visit the Village of Joy blog for a series of disturbing and vivid photographs of the aftermath of Chernobyl.) In a somewhat related tangent, I just found out the other day my great-grandfather's first name was Wolf. He, and my grandfather, were born in the Ukraine.

A wolf isn’t the only rabid creature in the area; it seems a rabid cat attacked several people in “one of the townships in Crimea” -- the cat has been killed.

Domestic cats are turning up rabid in Maine, with 42 rabid cats this year so far, according to an item posted on Rense.com.

(also see my post Killing the Wolf on Oregon L.O.W.F.I.
Posted by Regan Lee at 12:56 PM No comments:

After years of hard work it's finally paid off; new home for the crypto museum. Read all about it on Loren's blog Cryptomundo.
Posted by Regan Lee at 10:23 AM No comments:

On the Blogsquatcher blog, a post about "recent posts" on other Bigfoot blogs, with kudos to researcher Autumn Wiiliams and Linda Martin. I very much like what Autumn has to say about Bigfoot research:

Those of you who know me well know that the only strong stance I take related to the nature of bigfoot is that I REFUSE to take a strong stance on WHAT bigfoot is or is not. I have some suspicions, but that’s all they are. Suspicions. Something akin to conclusions that have been tentatively reached in order to form hypotheses and direct my field research. If they don’t work, I immediately head back to the drawing board, rather than sticking to hypotheses that don’t serve me well.

I know Blogsquatcher quotes that as well, highlighting her comments, but it's so worthwhile, I had to repeat it here. I'd also paraphrase Autumn's sentiments here regarding BF research to say the same about the UFO phenomena, but that's another story! Unless of course, it's a Bigfoot-UFO encounter, then . . . :)
Posted by Regan Lee at 7:18 PM No comments: