A list of encounters and sightings in Lane county, Oregon from Squatchable.com.  The reports are a hodgepodge of Bigfoot encounters from all over the area, and go back many years. It's amazing to know that many of these sightings are so close to where I live. Surrounded by Sasquatch, indeed.

Squatchable has sightings for all over the U.S. Find your area and check it out.
Posted by Regan Lee at 10:59 AM No comments:

Lost Boy in Woods Found Safe; Hung Out with Bear

Three year old boy found safe after being lost in the woods for two days. The boy says he was kept safe by "a bear."

The 3-year-old boy who spent two days lost in the woods of eastern North Carolina tells his family he “hung out with a bear” for companionship while hundreds of people searched frantically in cold and rainy weather to find him.
His aunt, Breanna Hathaway, shared that revelation on Facebook Friday morning, adding that Casey “is healthy, smiling, and talking” after being found late Thursday night. The post has gotten more than 500 comments and 2,100 shares through the day.Read more here:

David Paulides, of the Missing 411 books, has written that missing people, including children, often happen when it rains, or has been raining. I remember a couple of survivors Paulides writes about that mention a bear or ape like creature who helped them. Bigfoot? Paulides is coy about that, but it's possible. Or, angel, spirit, who knows. Bears are hibernating this time of year. Not to mention a bear might well attack, rather than protect. But, again, who knows?
Posted by Regan Lee at 6:29 PM No comments:

Email ThisBlogThis!Share to TwitterShare to FacebookShare to Pinterest
Labels: Bigfoot and UFOs

Wapiti (Elk) and Sasquatch: A Memory

(cross posted at my Orange Orb blog on Word Press)

[Preparing for my interview on Lon Stricker's Arcane Radio podcast this coming Friday, I've been putting together my Bigfoot material. Here's one of those things:]

This isn’t a particularly Fortean or cryptid sort of experience, but it was a profound one, and one I find revisiting more than forty-five years later. However, there is a piece of this experience that does fit in with Bigfoot and other crypto phenomena in a small way as we’ll see.

When I was a Girl Scout (Troop 1534, the Robin was our crest)  we went camping in Northern California. It was a great trip, and my first experience camping. We slept in tents, we hiked in the forests, ... the whole real life camping thing. New to me but I loved it. The first night, I remember laying awake in awe at the strangeness of listening to the screams of a woman, or maybe it was a baby. On and on it went, and I couldn’t understand why none of the adults seemed to care. Finally, I came out of my tent, scared but also intensely curious, to find out what was going on. I was very surprised when the camp leaders assured me those “screams” were not the pleas for help from a human in trouble, but wild peacocks. It took some convincing. I simply had never heard such a sound before. I’d seen peacocks in the zoo, but they never cried out like that, just walked around, their brilliant green and emerald tails bursting into jeweled colors every few moments. It was hard for me to put that pretty image together with the sounds I was hearing that night. Of course, since then, I’ve heard peacocks call like that many times. In fact, in the hills surrounding the city where I live, the wild peacocks can be a nuisance.

It was during this camping trip that I saw my first elk. I’m not sure what I was doing off by myself; I only have the memory of the elk sighting, and not what I was doing before or after.  But I think I was just . . . walking around, which is a bit odd, since we were all about the buddy system and checking in with the adult staff and basically just not doing stupid things like being twelve years old and walking around in the forests by yourself on your first camping trip.

I come out on the side of the road; a highway or something. Everything is very still, and very beautiful. I’m surprised the road is here, I didn't know there was one close by. We came in another way, that involved dusty dirt roads and turns. I just stand there, looking. It seems I’m waiting for something, and suddenly I hear a loud crashing sound coming from  across the road. I watch, and hear a snort, a kind of chuffing sound, and almost magically (or so it seemed to me) there was an elk. He came rushing out of the thick foliage and then stopped right at the edge of the road. We were no more than fifty feet from each other. I was amazed; what a beautiful animal! I wasn't scared, but I was in awe. True awe. There he stood, looking straight ahead. He must have known I was there, but he didn’t look at me or come towards me. He seemed to be allowing me to look him over. (I’ve wondered, years later, if the elk wasn’t afraid of me, how did he know I wasn’t a hunter? Or was the elk unaware of me  --- but I am sure he was absolutely aware of me.)

He just stood there -- he had antlers and huge black eyes, and was very large. I wasn’t sure what I was looking at at first; I had never seen an elk outside of books before. At first I thought it was a very large deer, but realized this was no deer, but an elk. (verified later when I looked it up.)  And here we were, standing at opposite sides of a road. After a few moments the elk seemed to fly across the road; just bounded in what seemed like one long graceful leap, and into the dark green of the other side.

I remember thinking that this was a secret thing that had just happened, a glorious strange private thing. I walked back to our camp (I assume I did) and that was that.

Bigfoot and cryptid debunkers and skeptics often say that people mistake the usual for the unusual. A bear, elk or some other animal is mistaken for a Sasquatch. The wild calls of a cougar, coyote, etc. is believed to be Bigfoot cries, or possibly something even more preternatural: the Beast of Bray road, or some such. All mundane sounds of animals mistaken to be something paranormal by nervous humans.

It’s a disingenuous and insulting explanation, which is applied to all witnesses who find themselves out in the woods, regardless of their experience. The person who’s grown up with camping and hunting or who’s lived their entire lives in rural areas is considered in the same group with those unfamiliar with flora and fauna. Myself, at that time long ago. I had never heard the peacock’s eerie calls, or seen an elk in its natural habitat. Yet I didn’t jump to supernatural conclusions. At twelve, I was only vaguely aware of things like UFOs and strange creatures, but I did have an open mind, and in fact, assumed that things like ghosts existed. I don't know where this trust in the “other” came from, just the way Im wired I guess. Even so, I investigated the call of the peacock, and simply accepted the gift of seeing wapiti. I didn’t assume those things were banshees or Bigfoot or anything strange.

I know too many people that I trust who have shared with me their Bigfoot encounters. To varying degrees, all of those people are familiar with the outdoors, having lived in the country, or hunted, fished and camped all their lives. To suggest they “mistook” a bear, or something else of a mundane nature for a Sasquatch is ridiculous. In fact, it is irrational to suggest that.

The debunker’s dismissal that “people see what they want to see” is also ridiculous. I didn’t, even in my twelve year old mind, believe I saw a fairy, or Bigfoot -- I knew I saw an elk, even though I’d never seen one before. (Believe me, as wonderful and magical in its way seeing that elk was, it would have been much cooler to have seen a fairy.)

Another tactic used by uber-skeptics is the “life itself is magical enough, only the bored or disturbed need to create something --Bigfoot, ghosts, etc. -- instead of seeing the natural beauty around them.” What these skeptics don’t understand is that both exist; it’s not a contest.  That elk was magical indeed.

And so is Sasquatch, (and that’s with or without the high strangeness aspects of the phenomena, another topic for another day) which, so far anyway, I have not been blessed to encounter. At least not in a literal, flesh and blood way.

"My Name is Flix" cover

Many years ago, when I first started out in the paranormal bloggingverse, I self published a booklet on a Bigfoot type encounter in Oregon. Cut and paste, comb bound. I'm sure the thing is full of typos -- I didn't keep a copy. I managed to sell a few on eBay. Found an image of the cover while looking around the internet: 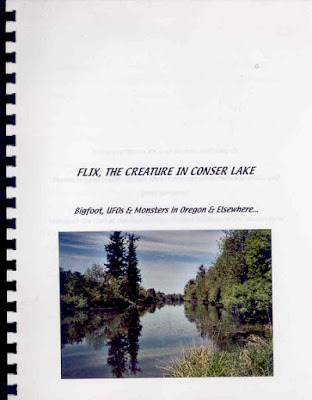 The photograph is of Conser Lake, although it isn't called that anymore. I know the new name but, while it is a matter of public record, (I assume) I won't share it since the lake is on private property and I think the owners got tired of people going down there.

From the Sasquatch Chronicles site, a game cam caught a white orb that comes zooming by, scaring the heck out of a fox. This was in the Catskills, a place full of spooky anomalous stuff. Take a look.

Brings up the question about orbs of course: just what are they? Orbs have been seen around Sasquatch. Of course, there are different categories of orbs: spirit orbs, UFOs/craft, something else, like the one in the video. Or is that orb a 'spirit' orb? We don't know of course. One thing seems evident; the orb has some sort of sentient energy.