For many Russians, UFO and Bigfoot equally realistic - English pravda.ru

For many Russians, UFO and Bigfoot equally realistic - English pravda.ru
Posted by Regan Lee at 6:38 PM No comments:

This is a great find: Jan Klement's The Creature at Sasquatch Classics. Thanks to Steven Streufert at Bigfoot's Blog for link. Speaking of Streufert, he has a lot of very interesting items over there, including updates on Jim Dodge's Conversations with Bigfoot.
Posted by Regan Lee at 6:45 PM No comments:

Autumn Williams on why her book Enoch is classified as non-fiction.
Fiction or Non-Fiction? | Oregon Bigfoot Blog
Posted by Regan Lee at 3:22 PM No comments:

hat tip to Lesley at The Debris Field.
Posted by Regan Lee at 1:14 PM 4 comments:

I've updated this: below is what I posted yesterday, just throwing up a link, and not commenting, mainly because I was tired and also, I am fed up with the anti-Autumn Williams cabal:

Updates on rants against Autumn William's book Enoch on the BFRO:

Update:
Here's the link to what Autumn has to say, along with several comments left by others at her blog Oregon Bigfoot.com: Apology to all the Mikes.

Why is this pack at the BFRO going at it once more at this time, almost a year after Autumn's book Enoch was published? I wonder if some of this doesn't have to do with the 2nd OSS (Oregon Sasquatch Symposium) coming up in June -- are they fanning embers?

Autumn can take care of herself, and she does so in her post. Still, this latest round from those at the BFRO is another example of the ugly nonsense that goes on in Bigfoot research. (The parallels to UFO research and other esoteric and Fortean realms applies.)

Someone calling him/her self "navigator" -- and the fact this person uses a screen name and not their real name is noted --  posted on the BFRO:


The fellow who told Autumn Williams (by phone) the stories that she eventually published in a book titled “Enoch,” is actually a yarn-spinning homeless person in central Florida who our investigators had encountered in 2006 in Polk County, FL.

2006. Autumn's book came out in 2010. And, as Williams points out, it's probably a correct assumption to say there is more than one person named Mike in Florida. And where is "navigator's"  documentation on his allegations?

Another poster: "JRawk12" comments on both Autumn's book and her mother's -- Sali Sheppard Wolford -- book Valley of the Skookum, which came out in 2006:


Is this really a big surprise in the first place? Usually the math doesn't add up for a reason...Good story, but it was painfully obvious that it was a fictional story from jump street. Same thing with her moms book. They're both good storytellers though! (Weird how defensive everyone was when people called B.S on her story back when it came out)

Personal opinion is personal opinion; we're all entitled and you think what you think. It's opinion Valley of the Skookum is "fictional," not fact. (Yes, the same can be said of my opinion . . .) 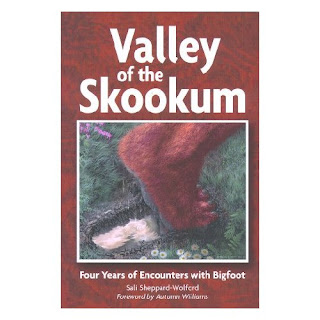 What irks me however is that, instead of looking at Valley of the Skookum, as well as Autumn's book, from a Fortean, open minded perspective, there seems to be a deliberate campaign against Williams (and Woolford) as well as debunking a particular aspect of Bigfoot research. That is, anything that presents itself outside of the flesh and blood box is considered suspect.

The former is ugly pettiness, sad but typical in Bigfoot, UFO, etc. circles. The latter is harmful for what it says about Bigfoot research. As with UFO research, the number of narratives in Bigfoot encounters that include high strangeness elements is huge. Yet many researchers continue to ignore these events and dismiss them with a virulence that is pathological at times.

What is ignored are the common threads of experience in high strangeness Bigfoot encounters. Whatever the causes for the similarities, they are... what about them? How to explain them? A glib response that witnesses are "whacked," or "lairs" simply isn't honest research.

I'm not suggesting Enoch and Valley of the Skookum are along the same lines -- they're not. Enoch is not "high strangess," (although, not doubt there are some out there who might say the relationship Mike describes is just that) and Williams writes about the roles of witness and researcher; an extremely important point that is too often missed by some.

For more, see my post for Oregon L.O.W.F.I.: Thoughts on Autumn Williams' Enoch.