The Most Interesting Man in the World, on Bigfoot 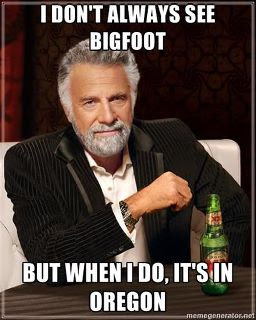 Excellently spooky account of a haunted place on Wallasea Island, Essex, from Cryptozooogy. This isn't Bigfoot related at all and I don't mean to suggest there is, but there is an interesting report of an ape like creature in this story that discusses zooform phenomena.


Still on the Track: NEIL ARNOLD: The Satanic Ape: n the case of some zooform phenomena, it seems that we are dealing with negative energy as a conjurer of monsters. For instance, the county of Essex has several cases of weird manifestations presenting themselves, but they are forms which clearly are not of some biological or zoological order. At Wallasea Island there was once a place called the Devil’s House which sat on the bleak marshlands flanking the River Crouch. The house, was more for a farm-like abode and took its sinister name from its owner, a chap named Daville, although author Eric Maple notes that’, according to the old records it was known as Demon’s Tenement as far back as the time of Charles II.’

Excellent points there Erich! I particularly appreciate his connecting us with Bigfoot as regards our so-called "junk dna" and the Sasquatch. Divinorum Psychonauticus: the Bigfoot-Ancient Alien connection- solved!
Posted by Regan Lee at 8:10 PM No comments:

On Texas Cryptid Hunter: "21 Degrees Between Bigfoot and You"

Pretty interesting! I admit, this clip pushes me back towards the "it's footage of a real Sasquatch" opinion. More here:Texas Cryptid Hunter: 21 Degrees Between Bigfoot and You
Posted by Regan Lee at 7:56 PM No comments:

Oh be still my beating heart! Ancient Aliens tonight, and it's all about "Aliens and Bigfoot!" Now you know I await this with great anticipation!
Posted by Regan Lee at 6:04 PM 1 comment:

I Know What I Saw…
My interest in the Bigfoot phenomenon started when I read the following passage written by a friend who recounted a close encounter she had with the creature itself. Her account is brief, but compelling, and read as follows:
“At the risk of sounding crazy … I once saw something like a Bigfoot myself, high in the Cascade Mountains in the dead of winter, on a moonlit night, while descending a mountain snowfield. After watching "it" approach for about one minute, and when it had come to within about 200 feet, I turned to my climbing companion to say that I was having a REMARKABLE hallucination. But before I could say a word I saw that my companion had gripped his ice axe with both hands and had raised his ice axe above his head in self-defence. So NOT a hallucination. "It" was about ten feet tall and leaving BIG footprints in the snow. The scientists will tell you that there cannot be such creatures, and their reasoning is persuasive - unless, of course, you happen to have seen one.”
She makes a good point in the last sentence, and it is one that cannot be gainsaid by any scientist. In the words of the famous UFO documentary, “I Know What I Saw”. Yes, people can be mistaken. But not so mistaken that they are hallucinating a ten foot creature stood in front of them at the same time as another person to their right. Sure, some sightings could be as a result of substance abuse But how many? Seriously.
Watching the Paul Freeman footage from 1994 in the same mountain range, I just wonder if it is the same animal she saw. To my mind the Freeman footage is compelling. If I ever had any doubts, my friend’s story and the Freeman footage combined dispelled them forever. She would never lie about such a thing, and the fact that there were two witnesses just strengthens my belief in her story. There is nothing that is ten feet tall she could have mistaken it for. Likewise, the Freeman footage is too poor in quality and too early, technically, to have been faked or tampered with. Along with Jeffrey Meldrum’s analysis of the casts Freeman made, I find it to be credible testimony. Sometimes what you see is what is there. It is as simple as that.
Paranormal Theories
One much-debated aspect of the Bigfoot phenomenon centres around the possibility of Sasquatch being paranormal in nature. Perhaps, like Mexico’s mysterious dwarfs, and the fairies of long ago, there is transcendent quality to the creature. It seems to play with us, in the way that orbs tantalise us with their appearance and instantaneous disappearance. Could Bigfoot, some wonder, be a manifestation of the same inexplicable entities, in crypto-human form? What both UFO and Mexican dwarfs have in common is Close Encounters of the Third Kind. People not only see them, but are materially affected by them in the real world. The Mexican dwarfs knock people off their bikes and frighten children playing ball after dark. They are violent and malevolent in nature, and there have been dozens of reports, from quite traumatised, and in some cases injured, victims. There is no explanation for the encounters, but they have happened. The same is true of UFO encounters, of course, with real physical craft being witnessed and filmed all over the world, in the thousands. Some YouTube UFO posters have actually given up uploading their footage as they have so much of it. Orbs are a daily occurrence, and yet there is no explanation for them either.
Is Bigfoot A Paranormal Entity?
For me, no. I did consider the possibility that the creatures could be another type of ‘alien’ for a while. The fleeting sightings, the vanishing, the lack of hard evidence, the total inability of anyone to have secured irrefutable proof – to me these put Bigfoot into the ‘Nessie’ camp. I have read widely on the UFO phenomenon and the different ‘species’ of alien that are reported by witnesses varies enormously. From the ubiquitous ‘greys’, to the mysterious ‘Nordics’, all the way to the Reptilians and towering Annunaki, there is no shortage of close alien encounters, with no end of strange beings. Each witness knows what they saw. But does it make it real? It’s a subject I have still to tussle with, but since reading on this and other sites I have read enough evidence – which I did not know existed, I may add – to convince me that Bigfoot is a real world creature. A gentle, shy creature in fact. The gentleness of movements and the relaxed body language of the being captured by both Paul Freeman’s video are rather touching. I am glad to read that there are people speaking out against the Kill and Capture mentality of those who want another trophy on the wall and the attendant fame that would no doubt follow. What I saw on the Freeman footage is a vulnerable looking, gentle creature who needs to be protected, and defended, and certainly not hunted and killed.
Posted by Regan Lee at 9:15 AM No comments:

The Gralien Report � Bigfoot is an Archetype: Sasquatch Reigns Supreme among “Folk Devils”

From time to time there are reports that fall under the “Bigfoot” category that are, to put it simply, present a lot of disturbing problems for eyewitnesses. While these “high strangeness” reports (an expression that had become innate to the study of odd occurrences tucked within the realms of Forteana) are in the seldom minority, they are often overlooked by the greater cryptozoology community for a number of reasons.

Primarily, this has to do with the fact that the study of creatures like “Bigfoot,” by virtue of the designated title cryptozoology (the study of hidden animals), approaches this mystery from the perspective that these entities, whatever they may really be, are in fact some form of biological entity that closely resembles humankind. To wit, if indeed the Sasquatch myth is anything more than a myth, the best avenue, and thus the most widely accepted approach to their study, seems to be afforded us in their treatment as flesh-and-blood entities. However, when peering a bit deeper into the mystery, these “beings” may boast a number of curious elements that beg further consideration… and may similarly warrant different modes of thought applied to understanding their overall meaning.