Tonight's Monster Quest was about Chupacabra. One thing I've noticed about MQ is that they avoid the darker side of things, or maybe conspiratorial side of things is a better way of putting it. What I mean is, when I first heard of Chupacabra in Puerto Rico ten years ago or so, I was on it! I was fascinated by the stories; and I kept returning to one possible explanation for Chupie sightings: some Dr. Evil experiment gone horribly awry. We're getting into some odd territory here, but there are American military and government bases there that are very secretive, a history of high strangeness and UFOs. The Chupacabra activity just came up from nowhere; suddenly, there they were. (Not quite actually; there is a history of goat sucker and vampire type beings in the folklore of the region.) 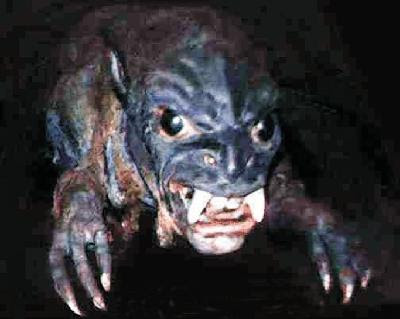 I remember seeing this image just about ten years ago. It was one of the first available on-line of the Chupacabra; the story I read that accompanied this image was that a school custodian found it and photographed it. I don't remember if that was in the U.S. or not; though I think it was, an L.A. school. This screams "fake" very loudly; but it is interesting that it looks a bit like the Texas chupies.

The Chupacabra stories "jumped" from Puerto Rico after a couple of years to Florida, and Mexico, . . . I remember years ago hearing Art Bell say there was a case in Oregon! No matter where the Chupacarbra attacks occur ed -- Florida, Mexico, Puerto Rico, etc. -- the description of the being stayed the same. And the description made sense, given the types of attacks. A strong being, bi-pedal, that could leap or jump quite high, seemed to have speed, luminous eyes (ethier because it seemed to be nocturnal, or the red glowing eyes are an added bonus to the overall Fortean high strangeness of the creature), these seemed to match the kind of creature that could be capable of desanguinating the poor victims. Strong, fast, lithe. 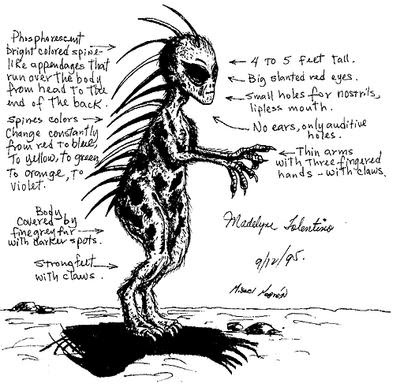 This image has been around for some time as well. The reports from Puerto Rico ten years ago say the creature looked like this.

Roughly eight years later, stories of Chupacabra started to come from Texas. But what's strange is that the description of this so-called Chupacabra differs quite a bit from the "original," -- yet the animal deaths caused by this Texas creature appear to be the same as teh ones in Puerto Rico, etc.

Well, MQ found that the Texas Chupie seems to be a dog/coyote/possibly wolf hybrid. With mange. Maybe. But what's strange is that it isn't just one creature like this, but a few, and from different areas. The fangs are strange as well. It doesn't add up, but there it is.

With the Texas Chupies, it could be that the hybrids, because they're hybrids, contaminated each other with mange, or . . .I"m just speculations. More like thinking aloud here, since I'm no wildlife expert and really don't know. What we do know is they exist; and, the animals they killed were killed in a weird enough way that only raises more questions. The fact that these UADS parallel the earlier Chupacabra deaths just adds to the mystery. It isn't enough to say the Texas creatures are "just" canine hybrids of some kind, which seems to be the case, for there are added elements of high strangeness that makes this a Fortean mystery. 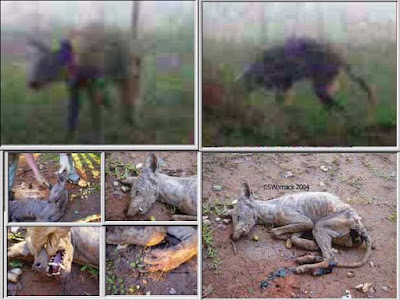 It could be that these Texas canines have nothing to do iwth the deaths at all; and the 'real" Chupacabra remains hidden.

So, is the Texas "chupie" the Chupacabra? It doesn't seem like it, yet the fact the victims seem to have been killed in the same way is curious.
Posted by Regan Lee at 10:52 PM

The phenomenon, which may have arisen out of stories 20 years prior of the 'Moca Vampire' (and perhaps further back to the Taino legend of the Jipia), have all but vanished from the island now. Sure, in touristy areas you can still find keychains or a beach towel emblazoned with the likes of Chupie - anything to make a buck. But for most locals, it's just that thing that was kinda big and now it's not.

And while there were military bases here at the time, they vanished after public pressure to stop using Vieques as a firing range forced base closures, cutting countless jobs in the process. Now, there is only Ft. Buchannon - a sleepy Army installation.

Much of the belief in a military conspiracy arises out of a deep-seated distrust of the US Federal government. Puerto Ricans are a proud, independent people and many dislike a situation they liken to "emperialism". So, when the naval base at Roosevelt Roads was working on sensitive projects, it was only natural that nebulous fears found purchase in the legends of the past, such as the Moca Vampire or Taino Jipia.

While I don't doubt SOMETHING took place, I do have my doubts that any military-bred creature escaped into the rainforests surrounding El Yunque. Especially when one considers the sheer number of feral dogs on this island - it is staggering.

I think the locals would have their doubts as well. Unlike areas of the world where a local creature becomes a fixture of legend and remains so, Chupacabras in Puerto Rico seems more and more an ephemeral zeitgeist, slipping into memory. This makes it all the more amazing to see it so flourish throughout the rest of Latin America. Of course, that only solidifies my belief that this is a cultural construct.

Much of the belief in a military conspiracy arises out of a deep-seated distrust of the US Federal government. Puerto Ricans are a proud, independent people and many dislike a situation they liken to "emperialism". So, when the naval base at Roosevelt Roads was working on sensitive projects, it was only natural that nebulous fears found purchase in the legends of the past, such as the Moca Vampire or Taino Jipia.

One of the many interesting things about the Chupacabra stories is the cross jumping jumping. Or something. What I mean is, it's migrated within Latino culture, but also, it's gone beyond that and entered other cultures as well. I'm also intrigued by the fact that, for example, what's been going on in Texas is considered the work of Chupacabra, and not something else.

thanks for the comments; very informative.

out of all the mythical, blood sucking creatures out there, the Chupacabra is almost certainly the sneakiest, name's hard to remember...
coffee!

Chupies are curious animals indeed. Have you seen that picture on ghost study?