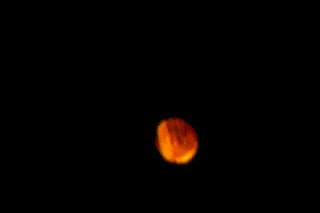 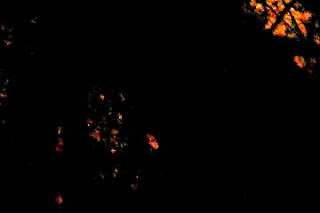 Another e-mail, with photos, of orbs and Bigfoot, comes my way . . .

I received an e-mail yesterday from someone who shared their photos with me, and gave me permission to post them on my blog. (This is not the same person as here.)

This person wants his/her identity and location kept private.
As far as the location goes, it’s somewhere in the south eastern United States. (Which by the way, is the same part of the country the previous person who contacted me is from, though a different state.)

ORBS
I’ll call this person “Pat” -- this is what “Pat” wrote about the land he/she lives on:

I "found out" this year, that I don't have a "haunted farm" as I had thought.. it is merely Bigfoot living here.... and a lot of orbs, day and night ones.

The orbs often accompany what Pat believes to be a Bigfoot, or even a "family" of Bigfoot:

These come complete with "Bigfoot sounds" as accompaniment, when they are around.
Bigfoot researchers have been out to the property.

Some of the things witnessed by Pat: tree knocking, responding back and forth with knocking, the orbs, footprints, and some telepathic communication, but Pat didn’t share specific details. 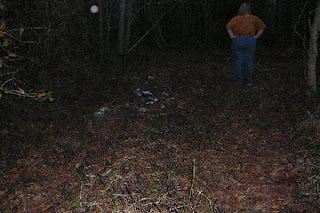 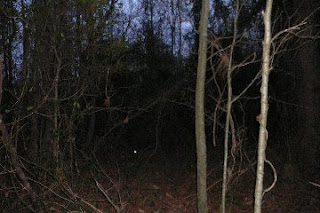 BIGFOOT
Like a few others that I’ve known who’ve encountered Sasquatch or Bigfoot or “Big Hairy Monsters,” Pat doesn’t like to call Bigfoot “Bigfoot,” preferring to call them family.

RESEARCHERS
Not surprisingly, many Bigfoot researchers gave Pat a hard time when it came to the orbs and telepathy, etc., though not all have. A few have told Pat they believe there is “something paranormal” happening.

There’s some interesting and disturbing things about Bigfoot research among some investigators that pat has experienced, but unless I get permission from this person I can’t post it. I will say though that it is too bad there are some (like a few well known so-called UFO researchers, that are actually embraced by many in the field) Bigfoot investigators who think not only ignoring, bu mocking, the weirder elements of encounters, throwing their weight around, and tromping through the woods and private property creating nothing but noise -- and sometimes with the intent to shoot -- is not Bigfoot research.

PHOTOS
This first photo looks suspicious to me. Almost fake. I’m not suggesting “Pat” is hoaxing or lying, I’m just sharing my initial response to this photo.

The other photos seem typical of orbs, and the orange orb is particularly interesting. “Pat” asked me if the orange orb is like the one I saw, and I have to say, yes and no. Yes as to color, but no as to size and “structure.” The orb I saw appeared to be a solid craft or machine of some kind, lit from within. And there was no Bigfoot phenomena associated with it. A different “animal” altogether.

Sali Sheppard-Wolford, who wrote of her encounters with a Sasquatch in the Pacific Northwest in Valley of the Skookum, mentions orange orbs that appear to have a connection with Bigfoot.

Author Lisa Shiel of course is all about orbs and Bigfoot. (Read her Backyard Bigfoot, and see her blog Backyard Phenomena

THE STRANGER SIDE OF BIGFOOT
So thank you “Pat,” for your comments and photos, and for previous people who’ve contacted me with their stories and images.

I’ve gone from complete disbelieve in an orb/UFO/telepathic/Bigfoot relationship, to acceptance that these things happen. The witnesses are not to be mocked, and the data needs to included, not discarded.

Beyond that, I can’t say why it is, but my own research proves that there is a relationship with these anomalous events. 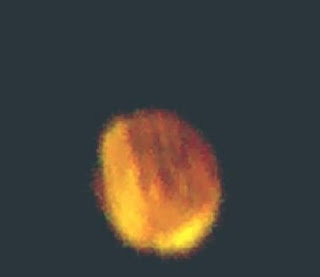 Richelle Hawks has a very well written and insightful article on Bigfoot and Mormons:Thus Spake Sasquatch: Notes on that Mormon/Bigfoot Connection on her Medussa's Ladder column for Binnall of America. Among other things, Hawks points out the folklore from non-Mormon culture about Mormon culture. I think a lot of these ideas about Mormons -- the "magic underwear" making the sound bite rounds, for example -- are veiled expressions of a bigotry towards Mormons that go way back. (The reason why the Mormons ended up in Utah in the first place is because of the vilification they experienced; they were literally driven out. I'm not defending or apologizing for Mormons, or any religion including Christianity. I am not a Christian, and not religious. Mormonism has its own issues of the fundamental variety: (the forced polygamy, etc.) and their own history of bigotry towards, say, African Americans, sexism, that, while in the minority, seem to loom large in people's minds. )

Hawks relates a Bigfoot encounter in 1835 with Mormon David W. Patten. A point of contention, Hawks points out, is that the Bigfoot spoke to Patten. Is it possible Patten described it this way, but the communication was telepathic? Another possibility is that this creature was an angel/fairy. Angels in various guises figure in a big way in Mormon tradition. And accounts of telepathic communications -- ongoing, over time as well-- exist.
Posted by Regan Lee at 11:31 AM No comments:

Son of Kong is Bigfoot? 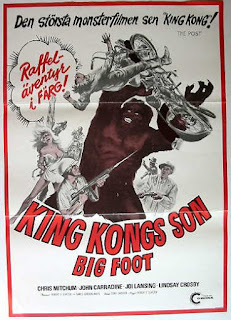 I first saw this over on Lesley's blog The Debris Field, which provided a link to Cryptomundo, where you can read more about this Bigfoot movie. Great poster!
Posted by Regan Lee at 12:16 PM No comments:

Cryptomundo has an entry on photos of a Bigfoot in Romania. More like an over sized elf in a big hairy suit with rubber abs. :)
Posted by Regan Lee at 3:51 PM No comments:

You know I love this one! Greg Bishop gives us a bit of an old Bigfoot and UFO case, and includes researcher Stan Gordon's insight.
Posted by Regan Lee at 4:55 PM No comments:

I’ve had a poll up for awhile now, asking: Anomalous Researchers: Are You of Native Descent? I did this because the meme is that those with American Indian blood are more prone to UFO, psychic and paranormal experiences, and/or are drawn to them. The poll isn’t to be taken all that seriously, it isn’t scientific in any way, just a casual question.

69 people responded (thank you!) and here are the results:

I’m not sure what to make of the “don’t know” and come to think of it, I don’t know why I included that. So by a teeny margin, it seems there is a majority who are Native that are involved in this field.

I’ve been working on an idea for some time, but haven’t figured out yet what to do with it exactly; what direction to take. And that’s the area of Native American myths, issues and the overall culture in the UFO and paranormal field. There’s a combination of appropriation, exploitation, sensationalism, marginalization, trivialization, and respect by those who “use” Native American traditions in their work. There are many who claim to be Indian who aren’t. Well, we can’t make that assumption, but one often wonders for obvious reasons. there are a lot of self styled medicine men, shamans and guides out there who have questionable backgrounds in this regard.

There’s the cliché of the haunted house or building or area being on “old Native burial grounds” and yet, this is the case many times. During the spiritualist seance days, it was common for the medium to have a deceased American Indian as their guide.

Treated with a sort of spiritual awe and envy, even while being trivialized and exploited, the Native American culture continues to be a theme in paranormal matters.

So, where I’m going with this I’m not sure yet. (Yes, I consider myself Native, of Lenape and Cherokee descent.)

Thanks for voting, and now here’s the next poll.
Posted by Regan Lee at 7:04 PM 2 comments:

JREF Complains About "Censorship" at Cryptomundo

Some members of the JREF are complaining about what they see as censorship from Cryptomundo.

What I love is the typical response of the faux skeptic, when they are ignored, and that is the “it’s obvious woos/Bigfoot believers/UFO witnesses etc. fear what skeptics have to say” routine.

This was sent to me by a good friend of mine, who is the creator of The Granmother's Circle Gathering here in Eugene. She had fowarded this to me from one of her contacts.

I don't pick up hitchhikers for free.

They either have to teach me a Navajo word I don't already know, or tell me a story.

Lately, I have been hearing the same story so often, with so many variations, I'm beginning to wonder if it's true.

It is the story of a creature I've come to call "the Navajo Bigfoot." According to at least five different hitchhikers I have picked up over the last three years, there is a Bigfoot-like creature roaming in the Navajo Nation.

It is about 7 feet tall, black, hairy and apelike, and has feet about a foot-and-a-half long. None of the hitchhikers had actually seen it, but they all knew people who had.

Most people seem to think it resides somewhere between Summit and Fluted Rock, but a man from Navajo Mountain swore it lives somewhere up there. (Maybe there are two.) Footprints have allegedly been found as far south as Klagetoh.

Some folks say the creature has supernatural powers. It reportedly appears at some gatherings, and one man told me several friends of his at a ceremonial gathering saw it appear and then vanish into thin air.

The Bigfoot might have been around a very long time. A middle-aged man remembered his father telling stories of such a creature, saying it appears when times are about to get really bad.

But, if it is something supernatural, it apparently still needs to eat.

A woman told me all the ranchers near Fluted Rock know about the monster, because they will find dead sheep that appear to have been partially butchered with some kind of blunt knife. And the giant footprints are sometimes around.

A man I picked up near Ganado said a neighbor of his had chased it across Highway 264 on horseback once, but it was so fast that it got away.

Another guy said he visited one of the Apache reservations and was surprised to find they have similar stories ... except the Apache Bigfoot is white while the Navajo one is black.

I'm not saying I believe these stories ... for all I know, there's some kind of conspiracy among the hitchhikers to pull one over on hapless drivers.

All I'm saying is, if I'm driving late at night and some big, hairy, barefoot guy sticks out his thumb on the side of the road, I'm going to keep driving - unless he has a mighty good story.

I stopped counting after ten -- ten threads (that I counted, may be more, or, not) on JREF. I missed this one the other day about Bigfoot on Mars.
Posted by Regan Lee at 11:46 PM No comments:

As if five, or however many it is, Bigfoot threads on the James Randi Forum aren't enough, here are three more that have cropped up recently: