Dreamtime and the Alien/Bigfoot Connection: Part 2- Is it all True Series #274 | Truth Seeker Forum

Dreamtime and the Alien/Bigfoot Connection: Part 2- Is it all True Series #274 | Truth Seeker Forum
Posted by Regan Lee at 10:09 AM 2 comments:

Found this in a stack of old magazines; this is from a "special" glossy editon of Weekly World News. Don't have the date, think it's about ten years old. 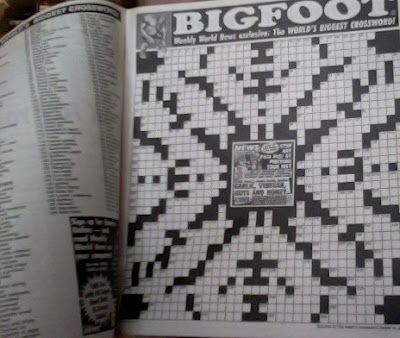 Meanwhile (see post below re: Ketchum) Bigfoot is still being seen; this report from January of this year, in Alaska. Frontiers of Zoology: Another Alaskan Bigfoot Sighting
Posted by Regan Lee at 3:44 PM No comments:

Interesting article, with equally interesting comments, at Bigfoot Lunch Club, on Dr. Ketchum's research. Dr. Tyler Kochjohn is quoted, as others , and while much debate and confusion, scramblings and speculations continue, it does seem one thing is becoming clearer, and that is that something unknown/weird is out there. Bigfoot News | Bigfoot Lunch Club: Two Clear Possibilities for Bigfoot: Hybrid or Mutant

I'm not on either side, (though I guess, if one has to even play the game and choose a side, I'm with Ketchum. Pretty much) but I respect both of these guys and appreciate each of their views. So here you go:Bigfoot News | Bigfoot Lunch Club: Thom Powell Drinks the Ketchum Kool-Aid
Posted by Regan Lee at 7:25 PM No comments:

On Cryptomundo, a clip of the Finding Bigfoot team on the Jeff Probst Show: Cryptomundo  Finding Bigfoot on the Jeff Probst Show. (I liked what Cliff said about Probst's use of the pronoun "he" to describe Bigfoot. Still wish they'd all stop using the term "Squatch" however.) Also liked what Ranee had to say. And she's the skeptic! :)
Posted by Regan Lee at 9:41 AM No comments:

Interesting theory, and not at all impossible:Ghost Hunting Theories: Are Bigfoot Ancient Giants' Feral Descendants?
Posted by Regan Lee at 7:42 PM No comments:

No idea who this seller is, but can't resist sharing. Just think, you can own a Bigfoot hair! Description comes with a story:Awesome Certified Bigfoot Sasquatch Hair RARE | eBay


He was about to pull his gun up to take a shot when a big animal walking on two feet came rushing out of the brush. It was carrying a huge rock over its head and threw it at the nearest elk killing it. The animal then grabbed the elk by a leg and dragged it off. Now if you know elk, you just can’t drag one off, they are easily 300 to 600 lbs on the hoof.

After listening to another intriguing and spooky interview with David Paulides (Coast to Coast, George Knapp host) last night, I found myself rethinking not only Dr. Ketchum, but Bigfoot as well.

For awhile I was excited about what Dr. Melba Ketchum would find. So was last night's C2C host George Knapp, who interviewed Dr. Melba Ketchum some time ago. Lots of games, it seemed, lots of attacks, lots of the to be expected nonsense in the world of Bigfoot.  (UFO World doesn't fare any better in this context.) Then I was disappointed and jaded. Then I just didn't care.

But if David Paulides's explanation on the entire Ketchum journey was accurate -- no journal would review her findings, etc. -- and if the evidence is truly what it says it is, then there's still hope. And bafflement, for it seems everyone just walked away from this. Of course, I haven't read the report, and Paulides pointed out that many who criticized Ketchum and the findings haven't actually read the thing. I can't comment much more than these idle musings of mine because I am not a scientist, and I haven't read the report; just the reports of reports. It is also too bad Ketchum seems to have behaved badly at times. Maybe this was due to simply being overwhelmed by her lone seeker status out there in Bigfoot Land. Lots of naivety, at best, and silly sloppy missteps seemed to have happened, adding to a carnival-like,  here we go again feeling in Bigfoot Land.  But all that can be ignored if the evidence is what it's supposed to be: Bigfoot is not a giant ape, but something completely different. That's huge of course and huger still: Bigfoot is both its own mysterious self, as well as part of us. Yet after a few people acknowledged this finding, people went missing. Some were offended, some laughed, but we haven't seen any paradigm shifting news stories break on CNN.

Meanwhile, David Paulides continues his research into the strange stories of missing humans in parks and forests. Many of these missing are children. He alludes to the possibility;  Bigfoot, or a Bigfoot like creature, as being responsible for these disappearances. The few children who have been found alive after going missing for a few days have strange tales to tell of "ape men" and other high strangeness. In last night's interview on C2C, Paulides referred to Native Americans and their tales of Bigfoot -- as being human -- and their on-going relationships with this being. Yet, with some exceptions, most, including BF researchers, ignore this fact.

What's strange about the missing humans is that they disappear abruptly, often in daylight, often while in the near proximity of others. While logic says these missing people would be found downhill, or near water, they are often found (if found at all) quite a distance aways, and uphill, over extremely rough terrain difficult to cover. Very weird for adults, and much stranger still in the case of little children. Stories of "ape men," and other inexpiable events add to this mystery. Adding fuel to conspiratorial speculation (which doesn't mean it's invalid) is the presence of military in some of these cases, who act covertly and separate from parks authorities and local law enforcement agencies while ostensibly searching for the missing.

IF Bigfoot is responsible for these disappearances, that's cause for a shift in beliefs about we think Bigfoot is. Many of these stories contain really weird "high strangeness" elements that have always annoyed many a Bigfoot researcher. UFOs? Aliens? Underground beings -- reptilians? Of the latter, Paulides said he's received a few detailed emails about that subject, but he is unfamiliar with that realm and doesn't want to go there. He referenced John Mack and his work concerning abductions -- will we hear of a Bigfoot/UFO theory from Paulides in the future?

There's enough strangeness, and enough references to a Bigfoot creature, in Paulides missing persons work, to consider that Bigfoot is more than "just" a big ape, or strictly a flesh and blood creature. It's possible this BF being is a variation of Bigfoot, another type, related or something else altogether; something that looks like an "ape man" but clearly has abilities transcending ours at the moment.

MSM fluff piece on the more outlandish theories on what Bigfoot is. Yes, aliens is an included topic. While I appreciate where they're coming from on much of this (even while disagreeing) I don't understand why "Bigfoot buries its dead" is considered a wacky theory. 11 crazy Bigfoot conspiracy theories - Yahoo! News
Posted by Regan Lee at 5:17 PM No comments:

Nick Redfern:Lair of the Beasts: Bigfoot: The Problem of Food - Mania.com

"Lair of the Beasts: Bigfoot: The Problem of Food - Mania.com: Many researchers of the Bigfoot phenomenon take the view that the hairy, man-like beasts are some form of unknown ape. Or, they suggest that the creatures may represent a surviving, relic population of the presumed long-extinct, ancient ape known as Gigantopithecus, I, however, do not.


Rather, I take the stance that Bigfoot is stranger than either of the above scenarios; in fact, much stranger. Indeed, it’s fair to say I think Bigfoot is a beast of paranormal – rather than flesh and blood – origins. There’s a good reason I say that. It has to do with Bigfoot’s eating habits. Or, more correctly, it’s lack of eating habits.


This is something, without doubt, most noticeable when it comes to the matter of Bigfoot in Britain – for which literally dozens and dozens of reports exist."
Posted by Regan Lee at 2:27 PM No comments: