I've closed the poll on Celtic ancestry and paranormal experience. I was curious how many UFO and paranormal researchers and witnesses have a Celtic background; according to the popular lore that these things happen more to people with Irish, English, Scots, Welsh, and so on genes. That, and Native American heritage. The previous poll, on Native American heritage, showed that there was a higher number of people with Native ancestry; and there seems to be a high number with Celtic ancestry as well. (I have both: Scots, English, Cherokee, Lenape) -- of course, how many stopped by this blog without a Celtic background and didn't vote in the poll? Not at all scientific, I know, but fun! Thanks to all who voted.

Tim Binnall’s article on Tom Biscardi and his C2C appearence, written in 2005.
Posted by Regan Lee at 2:19 PM No comments:

Bigfoot researcher Lisa Shiel has a new look for her blog Backyard Phenomena, which I like. The previous look was fine, but I like this better. I don't know if Lisa had always had this up on her blog, but I just noticed: "exploring the paranormal universe with Lisa A. Shiel" which is a nice touch.

Lisa's recent post is Fairy Lights and Glowing Orbs, once again asking the question, do these share a relationship with Bigfoot? Is Bigfoot a fairy, even? Something Shiel discusses, and I've wondered as well, as I wrote about for my Trickster's Realm column for Tim Binnall's Binnall of America site:

I’m still making my way through the very excellent book Daimonic Reality, by Patrick Harpur. (Usually I’m reading at least five books at the same time, so it takes me awhile.) Harpur discusses “paranormal Bigfoot” and suggests that the so-called ‘paranormal Bigfoot’ (a whole other topic unto itself; one I’ve been fascinated with for a long time) is a fairy.

‘Fairy’ for lack of a better term. Unlike the image many of us may have of fairies -- that they’re diminutive, and sweet, pretty girly colors with transparent wings and delicate forms -- fairies come in all sizes and shapes. They are sometimes friendly, sometimes mischievous, sometimes dangerous. They are fickle, easily offended. They need to be treated with some dignity and care, respect and distance. Traditional folklore tells us that leaving food out for fairies is important. Harpur describes a family who had Sasquatch-like encounters on their property; the being seemed to hang around the place, took the food offered, at times seemed playful. But when humans got too close, expected too much, and didn’t leave food out, it was gone forever.

The behavior of fairies can mimic hauntings. What we might assume is a haunted house, and its apparitions and actions seem like those of ghosts or spirits, are not ghosts (impressions of the once living humans, or interactive deceased) but fairies.

Sometimes these “fairies” attach themselves to a specific individual or family. This is what got my attention in particular; I have a close friend who, along with many members (mostly on the female side) have experiences with ghosts and hauntings, as well as UFO events. Many family members, who are scattered all over in different states, have elaborate stories of paranormal, ghost like encounters. Ghosts seem to follow them I, along with everyone else in the family, assumed these things were due to ghosts. I myself have seen and heard many “ghostly” type things connected to this family.

But I always wondered at the sheer number of hauntings in this family. It seemed to be very unusual; all theses people, regardless of where they lived, have ‘ghost issues.’ There often was so much activity; and the interactions between whatever entity is in this house (or, entities) seemed too intense for just a ghost. Reading Harpur’s suggestion that it is entities that are not human, that are in fact, fairies of some type, attaching themselves to a family is intriguing. It’s an interesting road I hadn’t explored.

Both in the cases of ‘paranormal Bigfoot’ and some hauntings, this idea of a fairy entity as the cause for the manifestations seems to fit. Both topics -- Bigfoot and hauntings -- are huge, of course, and deserve their own focus. There’s much more to what Harpur says in his book about this overall. I’ve only touched upon an idea about what might be occurring in with my friend, and her family, as well as the Bigfoot idea.

One more fascinating thread to explore in the land of the weird! 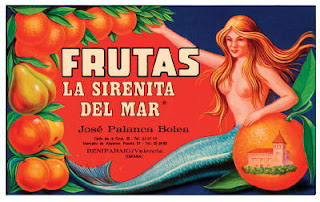 I enjoy finding images of mythical and legendary creatures on advertising, espeically vintage advertising. I'm sorry to say I forget where I found this, I stumbled on it a few days ago. Pretty neat!
Posted by Regan Lee at 1:56 PM 2 comments:

From the blurb on YouTube:
"In a special Animal X-pedition we accompany the Bigfoot Field Research Organisation (BFRO) to the Gifford Pinchot National Park in the Pacific North West of the USA and witness a startling discovery - a body imprint of a Bigfoot.

Found in a remote area of the Cascade Mountains known as Skookum Meadows, the BFRO team cast the imprint using more than 200 pounds of plaster. Named the "Skookum Cast," this monumental piece of Bigfoot evidence is shipped to a laboratory in Seattle for forensic analysis."

I can't help but think this is a hoax; despite the many photos of different people holding the thing. It's one huge bunny! Is it right to breed rabbits this big? I don't know; just asking. What'd be the point? It's sort of like having a giant cat. Unless, gulp, one breeds them that big for food. Oh dear. Okay, it's a hoax.

Thanks to Nick Redfern at Something in the Woods, where I first caught this link...
Posted by Regan Lee at 4:49 PM No comments:

What’s going on lately with the sleazy seedy side of Bigfoot related things? Poor Sasquatch, minding its own business,and we have carnival hucksters like Tom Biscardi, and this creep: Gene R. Morrill, who claims that he was molested by Bigfoot when he was a child, and that’s the cause of his own molestation of children as an adult.
(As someone pointed out on a thread about this at Cryptomundo, it’s possible Morrill was molested as a child, and his repression/coping defense has manifested in this lurid, sad tale. The same thought occurred to me. It’s still very sad.)
Posted by Regan Lee at 11:50 AM No comments:

Tom Biscardi, (who's been taken over by the spirit of Carl Denham)is at it again. (See Biscardi's Bigfoot Carnival.) Another attempt by Biscardi to capture a Bigfoot, this time using a woman as bait. I kid you not.

Team Biscardi are going out, as part of a new television series entitled Strange, to find Bigfoot. All the expected equipment: infrared, DNA collecting thingies, a “heightened sound system,” and a lot of like minded Bigfoot hunters.

But this, this, is too much:

Oy vey. (I don't know if anyone's told Biscardi this or not, but it's not King Kong that people have seeing out there, it's Sasquatch.) 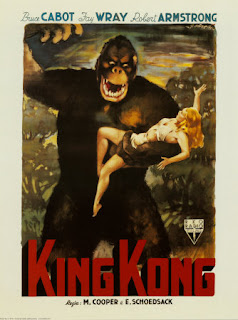 They’ve managed to get half the town of Lamar Point in Lamar County involved. Using a woman as bait is bad enough, but The Biscardi Circus isn’t done:

This trip, Biscardi’s team brought along shotgun-propelled darts designed to stick into a creature and drop off after capturing its DNA. The brightly colored darts then can be sent to a lab to find out the ancestry of the creature.

(Source: On the Bigfoot trail ... again, By Bill Hankins of The Paris News)

My new Trickster's Realm column is up at Tim Binnall's Binnall of America. This week's article is about "Manchines," -- and more; the very weirder side of weird Bigfoot. You can read it here: Covert Ops and Cryptos: A Fortean Esoteric View.
Posted by Regan Lee at 12:56 PM No comments:


What Mythological Creature Are You?
Posted by Regan Lee at 3:30 PM No comments:

Hovey asks: "Is There a Bigfoot Mafia?"

Melissa Hovey has a funny, sad and interesting post at her blog Bigfoot Research. Funny, because some people are such obvious honking flapping clown shoes. Sad, because these same people don’t have a life and think they’re actually important -- yet don’t have the ethics to sign their own names. Interesting, because it’s all part of the phenomena -- the humans within the research are as intriguing as the thing being studies -- and for more on the stupidity that drags alongside Bigfoot, UFO, etc. research in genera.

(It’s also funny because Hovey has a good sense of humor and doesn’t take any crap!)
Posted by Regan Lee at 12:39 PM No comments: 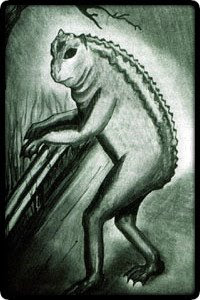 John Rhodes, Lizard Man expert, will be on Coast to Coast this Thursday. I love Lizard Man stuff. Should be a good show.

The image seen here; the drawing of the Loveland Frog, has appeared all over the internet. The drawing was made in 1972 by a witness who saw the creature.
Posted by Regan Lee at 9:08 PM No comments:

R.E.M., Rodrigo Y Gabriela .The Cure, Death Cab For Cutie, The Breeders,and Modest Mouse are among the groups booked to play at the sixth annual Sasquatch Music Festival in Washington. May 24 through the 26th.
Posted by Regan Lee at 8:54 PM No comments:

15 BIGFOOT THREADS ON JREF, AND COUNTING!

Every time I think I have all the Bigfoot threads down from the JREF, I find that I've missed one or two. So here they are. Be sure to check for updates, because no doubt there will some!
Bigfoot Found!
Montana Bigfoot Hoax
Bigfoot in West Virginia
3 Toed SC Bigfoot
Bigfoot on video? Memorial Day 1996
Man accuses Bigfoot of sexual assualt
Another Bigfoot Video

Bigfoot is real I have the proof

Native American myths/traditions support Bigfoot? A critical look
(actually, in spite of the context of this thread being on a chronic skeptic forum, it's an interesting thread at times.)

I Saw Bigfoot Kissing Santa Claus
Suppose Bigfoot was real and I had the proof?
As I've commented before, for a subject that invites ridicule from the skeptic crowd, they sure spend a lot of time discussing it.
Posted by Regan Lee at 8:49 PM No comments:

Oh for the love of the great flippin' goddess!!! When it comes to UFO and Bigfoot research, the biggest problem is not the (perceived) lack of science, or (perceived) lack of acceptability, etc. it's people. Big idiots acting like the idiots they are. Christ almighty, what a bunch of grudge holding, smug, self important, petty, and vindictive individuals that roam the UFO and Bigfoot landscape!


Bigfoot researcher Meliss Hovey writes about the pinheaded reactions of some in the field who seem to care about "morals" and her personal life, including her personal sex life. It's a very nasty tangled web out there in the world of the weird, and it isn't because of aliens, UFOs, Bigfoot, or other unexplained things. The only thing unexplained is why some people are such huge flapping clown shoes.
Posted by Regan Lee at 5:18 PM 7 comments: