Revisit with the Lake Worth Monster

Link on the Professor Hex blog: Couple Say They Saw Lake Worth Monster Forty Years ago.

Link on Professor Hex takes you to the article, with the famous photograph of a ridiculously bulky white Bigfoot like type being.

Like other BHMs (Big Hairy Monsters) stories, it appeared from nowhere, did its thing, then left.

The Lake Worth Monster — aka Goat-Man — hasn’t been seen regularly at the Fort Worth Nature Center since a very memorable summer 40 years ago when all of Texas seemed to buzz with the news that a hairy, scaly 7-foot man-goat-beast was terrorizing the good citizens of Tarrant County.

"Every so often, it will come up in conversation," said Suzanne Tuttle, manager of the Nature Center. "Somebody will say, 'I remember when that happened.’ "

Here's a very interesting comment about Sallie Ann Clarke, who wrote a self-published book about the monster titled The Lake Worth Monster of Greer Island. The book was a "quick-draw and slightly tongue-in-cheek book" about the creature. Clarke has had many strokes and can't speak, her memory isn't good, but her husband says this, of her book:
C

Clarke has always regretted the way she wrote her book, he said, because after she published it, she saw the monster on three occasions.

"If I’d seen it before I wrote the book, the book would have been quite a lot different," she told the Star-Telegram in 1989. "It wouldn’t have been semi-fiction. It would have been like a history."

The article goes on to say that many have come forward with stories of their being involved in hoaxing, or playing pranks on people at the time. I get the feeling these happened after the fact; in other words, something anomalous was going on, and others had their fun at its expense.

Read about the McMinnville UFO gossip and more!

Nick Redfern will be a guest Acceleration Radio, with Bruce Collins, discussig his book There's Something in the Woods and British Bigfoot.5PM to 7PM Pacific Time.


Read about the McMinnville UFO gossip and more!

The "Eel Siren" of Maine

Fascinating entry on Bigfoot researcher Linda Martin's Bigfoot Sightings blog:
Maine: Report of a humanoid that may be reptilian. A woman that Linda has been in contact with shares her life long encounters with a reptilian she also refers to as an "eel siren." This isn't, as Linda comments, a Bigfoot report, but I agree with her response to this story: sometimes some stories are so intriguing that aren't Bigfoot reports you have to share.

As I commented at her blog, as weird as this story of the "eel siren" is, there are plenty of stories of encounters with reptilians. I know of a couple in Washington state who are obviously living in some kind of anomalous portal zone, where they have heavy UFO activity (and fighter jets following), along with both Bigfoot sightings and reptilian sightings. There's a lot more to that whole situation that I'll probably report on eventually.

Anyway, fascinating story, visit Linda's blog to read all about it.
Posted by Regan Lee at 12:23 AM 1 comment: 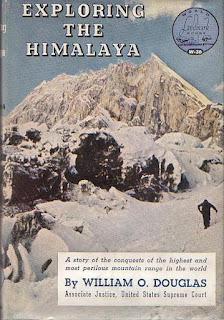 Neat find: Exploring the Himalaya by William O. Douglas. I found this book in the discard pile at work. 1958, Landmark, hardcover. Pretty good shape; has the typical school stamps all over it.

Naturally, the first thing I did was to look up Yeti in the index. There isn't a listing for Yeti, but there is for Abominable Snowman.

...the people of Sikkim believe there is such an animal. When I was in Sikkim, I visited with the Maharaja - ...a devout Buddhist. He told me that he believes the abominable snow man exists - that one night at Gangtok he looked out the window and saw one racing across his lawn.

Here's a reference to Yeti, with descriptions:

Many hillmen believe that any abominable snow man will kill them. the hillmen call it the yeti. It is supposed to be of either the bear or ape family - grayish with a pointed head and about four or five feet tall. Tenzing, the famous Sherpa, told me that he believes the yeti exists and that it is an ape.

And of other expeditions:

Britishers have photographed an apelike footrpint with five toes made by some unknown animal in the high snow. ...Japanese expideitons to the Himalya have brought confirmatory evidence that the yeti actually exists.

What that "confimatory evidence" is isn't stated.
There's also a reference to a female being; possibly a yeti or yeti type creature, or something different:

There are also legends about a mysterious snow woman. She is said to have only one leg and she always carries a pipe between her lips. She frequents the high snow fields and whistles at passers-by. Her whistle is thought to entice men ontlt he glaciers, where she devours some and makes love to others.

Still at it: Bigfoot Links on the James Randi Message Board

So, just finished lurking over there and saw the first three threads in the "general skepticism and paranormal" section are about Bigfoot. The next three aren't, then the seventh one is back to Bigfoot again. Next two aren't, then another BF thread. On the first page alone, with 30 threads, eight are about Bigfoot. I don't think any other subject has generated so many different threads; maybe UFOs and psychics would be the next two categories.
Posted by Regan Lee at 2:47 PM No comments:

Monster Quest on Feral Dogs: Shame on them!

Not about Bigfoot or any other anomalous crypto creature, but dogs. On my animal blog Teme: Irresponsible Monster Quest: Feral Dogs.
Posted by Regan Lee at 11:22 AM No comments:

In July of 2000, Matthew Johnson saw a Bigfoot in the Oregon Caves National Monument national park. Here's an update, with video interview.


Read about the McMinnville UFO gossip and more!

On Blogsquatcher: All in our minds?

The Blogsquatcher has an interesting post: Giving the "It's all in yer mind" theory some ammo You know how uber skeptics like to say, in complete seriousness, that Bigfoot is simply all in our minds? Blogsquatcher thinks it's ridiculous too, but he takes this idea in a different direction, even while acknowledging he isn't exactly in agreement with it. He is however, willing to explore the idea and put it out there, which I appreciate;too many BF as well as UFO writers don't like to stray too far from their comfort zones.

Blogsquatcher discusses Jung, archtypes; quotes from a Daily Grail review of Benny Shannon's The Anitpodes of the Mind and asks some intriguing questions,and asks if we might share a knowing of "half man half animal" even within our minds. The use of consciousness shifting drugs takes explorers, or psychonauts into these realms, but more specifically, shared imagery regardless of culture.

If Bigfoot is a paranormal creature and not just a big hairy ape, maybe a fairy or damion, as Patrick Harpur (Damonic Reality) or Lisa Shiel (Backyard Bigfoot) suggest, it's possible we can access a place where Bigfoot resides; a place where our minds are able to travel to, aided by substances such as ayahuasca.

I'm not sure what to think of this either, but it is very interesting, and, like the subject of UFOs and encounters with that phenomena while having ingested psychotropic drugs, it isn't all just a case of simple hallucinations and general tripping. Work done by Hancock, McKenna, Lily, Lear, Pinchbeck, tell us that it isn't that simplistic.

Read about the McMinnville UFO gossip and more!

Update: I added a little oil pastel drawing I did a fear years ago of the silver suited being I saw. . .

Watching Monster Quest last night -- a good episode, about Bigfoot -- and Jim says to me that he'd rather see a Bigfoot than an alien. I agreed. Then he said he has "no doubt extraterrestrials exist -- none" -- and that he "doesn't want to know more, since "we've both probably been abducted anyway." That's the second time he's come out and said that in recent months. Hmmmm...

I think it would be a true gift and an incredible experience to see a Bigfoot. My only hesitation would be one of my qualms about losing credibility; after all, both Jim and I have seen several UFOs, have had episodes of missing time, and a life time of paranormal experiences including ghosts, psychic experiences,astral journeys, hell, we're walking, talking Fortean weirdos. I'd be afraid people would think I was just making it up; that I saw Bigfoot. If I were ever to see one. On the other hand, screw 'em. If I were ever fortunate enough to see a Sasquatch, well, lucky me and then I'd know what I know about that.

As to abductions, while I think something really, really extraordinary happened, I still can't get to the place where I think abductions are a literal event. I've never seen an alien in the waking state, unless, my silver suited alien childhood memory is literally exactly as I remember it. For some reason, I remember it as real, and yet, always place it in some disjointed category of "other" -- not asleep, not awake, not not real, but not . . well, maybe it's just plain old denial. By the way, my column in this issue of UFO Magazine is about silver suited aliens. Nice how I got my plug in, eh? 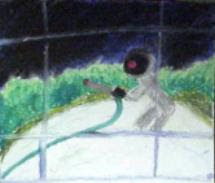 As to the Patterson-Gimlin film, Jim is 99% sure it's authentic footage of a real Bigfoot, and is almost as sure there is a Bigfoot as he is sure there are aliens. He's leans a tad towards being in favor of aliens. For myself, while I have no doubt at all Bigfoot exists -- for one thing, just what is it all these witnesses are seeing, if not a Sasquatch? -- I am minuscially less sure the P-G film is of a real Bigfoot. I want to believe it's so; I just can't see one way or the other. Some days it looks indubitably like a real creature; swaying breasts, arms, the way it's looking back. Other days it's looks phony; the weird white face showing through and mask like appearance of the fur on the face, the bottoms of the feet.

But, as MQ pointed out last night, the analysis done on the original footage shows that blurring has a lot to do with the way the images come across, as well as the film 's translation to video, etc. No human could fit into a suit like that, the technology that would cause things like fur swaying wasn't invented back in the 1960s, when the film was shot, and, it turns out after analysis the creature was taller than thought, 7ft or more tall. And yet I can't be 100% sure, as much as I want to be.

It doesn't matter however. I believe (yes, I said "believe!") Bigfoot exists. What exactly is Bigfoot, who knows, but if nothing else I can't ignore the countless eye witness reports of people who say, in all sincerity, they've seen a Bigfoot.
Posted by Regan Lee at 2:14 PM No comments: