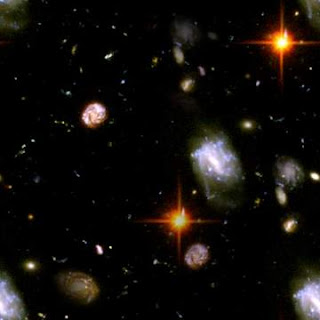 I was going to title this "Bigfoot From Space" then I realized that'd give the wrong impression. This time I'm not talking about the idea of Bigfoot coming from space, but seeing Bigfoot from space, as well as other cryptids.

Benjamin Radford is an arch skeptic. He’s one of the standards that appears on UFO, Bigfoot and other Fortean documentaries; like Michael Shermer and Joe Nickell, Radford appears on these programs to offer us their reasons on why bigfoot, or UFOs, or abductions, etc. don’t exist.

He acknowledge the difficulty of finding a Bigfoot in “heavily wooded areas” but comments that:

While satellites would be of limited use in heavily wooded areas, Bigfoot creatures have been reported in many places with relatively little forest, including Nevada, New Mexico, Utah, Texas and Arizona. A single 12-foot Bigfoot may or may not be hard to spot, but a family of them would be easier to find

He then makes a weird turn on the logic train:

Of course, if such searches are done and still reveal no solid proof of the monsters' existence, few minds will be changed. Diehard believers can always claim that all the monstrous beasts somehow hid undetected or are masters at camouflage. Or the searchers didn't look long enough or in the right places. It only takes one live or dead Bigfoot or lake monster to forever prove that they exist, but no amount of failed searches will ever prove they don't.

Well, if a satellite search doesn’t turn up a Sasquatch -- “twelve foot” tall or not -- that doesn’t prove anything. It’s only data: a search was done by satellites, nothing found. The conclusion that “there is no Bigfoot” is merely interpretation of that data. An assumption that none exists. It isn't proof it doesn't exist.

I recall seeing footage of some kind of giant snake (anacondas?) on some documentary af few years ago. They were filmed from the air, and these things were huge. There they were; on film, and even so, denial of exactly what they were, how big they “really” were, and so on, continued. Pretty amazing stuff, this footage, and yet it slowly sank from the cultural milieu. Now if you bring up “giant anaconda’s” you’re treated like a kook. (We also have film footage of Big Cats and there's still debate on that.)

So, if we spend the money on satellite searches for Bigfoot and other cryptids, and we do get images of these creatures then what?

Will further argument about their existence cease? Will all the thousands of witnesses be vindicated? Will the pathological skeptics and debunkers apologize to those they’ve insulted, and worse, once it’s shown there “really is” a Bigfoot?

I’m not against any kind of satellite search for these creatures. I just don’t care. For those that have seen them, they have the proof. For others, like myself who’ve never seen a cryptid, that’s okay. I’m fine with it. I tend to think they exist, but if it’s somehow proven they don’t (and how can that ever be proven?) okay. And if it’s proven they do, I’ll have mixed emotions.

On the one hand, it’ll be nice to know, and everyone can relax. But it will also lead to all kinds of issues about protection of the species and its environment. We’ll also have questions and controversies surrounding the new question: “Okay, we know it exists, but just what exactly is it? Which leads to the possibility of killing one for study, something I am absolutely against.

I find it a little topsy turvy that an industrial strength skeptic like Radford would urge satellite searches for Bigfoot and other cryptids. On the one hand, he dismisses such “beliefs” with typical scofftoid aplomb. On the other, he considers using high technology to search for the things. What does he want to do with such knowledge if one of these cryptids is found? Would he be okay with further study, including expeditions to kill one?

I think those skeptics who dismiss the possible reality of Bigfoot and other creatures, yet suggest ways to look for the things (like the use of satellites and so on) need to take another step forward and tell us what they think they'll do with such knowledge, er, "proof" if one is ever found. It'd be interesting to know where they stand on such issues. Do they support a kill policy? Work towards protection of habitats? That's a good question for all concerened, skeptic or not.

Thanks to Lisa Shiel of Bigfoot Quest and Nick Redfern, There’s Something in the Woods. Lisa has a poll right now about science searching for Bigfoot.
Posted by Regan Lee at 2:33 PM 2 comments:

Cyrptomundo has an item on the Yeti tracks just sold.
Posted by Regan Lee at 5:10 PM No comments:

Had a dream I saw Bigfoot. The dream was all mixed up with work place stuff, home stuff; something about cleaning out an old storage/garage kind of structure with one of the new teachers where I work. This shed like thing was right next to my house. Behind both the shed and the house was where the woods started.

There was a crowd of people here, all helping to clean out this thing. Suddenly the teacher “yells’ but in a stage whisper: “Get back! Everyone get back!” and motions us with her arms outwards, while she’s stepping backwards. We all move back a little, and she points to the dark wooded area.

At first I see a couple of tall, black (in shadow) birds, like wild turkeys or pheasants. Then I see a Bigfoot; a tall, dark figure striding across, off to the right. I am amazed, and awed. I’m not frightened, but a bit nervous. After all, it’s a Bigfoot! A little respect here, please. It knows we’re all here, we’re all looking at it, but it doesn’t care. It just wants to get to where it’s going.

In this dream, I am so ecstatic over seeing such a creature. It’s unbelievable. No doubt at all, at all, that it was exactly what it was; a Bigfoot. It just was, end of story.

And in the dream, I had the thought that I was damn glad there were plenty of other witnesses, because if I had been alone and seen it, who’d have believed me? Here, about fifty people saw the creature.

I run onto my porch to see if I can follow the Bigfoot; sure enough, he comes around the back and down along the side. There’s a cyclone fence between the other side of my house and the Bigfoot. I watch him walk off, he disappears from sight as he walks between the houses across the street.

I’m so excited I run down the street a couple of blocks to the town, where there are buses, etc. I run around like a crazy person, asking everyone I see, “You saw it, didn’t you? I know you did, you were there!” and they say “Yes, we did, it’s true.”

Later, I go back to my porch to see if I can see Bigfoot again. I see him! I’m so damn excited; then realize, no, it’s not a Bigfoot, it’s a teenager in a hooded sweatshirt. He’s imitating Bigfoot! My first response is anger, how dare he pull off this hoax?! Then I realize, somehow “know” that he didn't’ hoax a thing, that was a real Bigfoot all right. This kid is just trying to protect Bigfoot by acting like him. Which doesn’t make sense, but it was a dream, after all, and dreams have their own logic.

I call out to the kid, good naturally, that I’m on to him. He turns and smiles sheepishly at me and hurries on.
Posted by Regan Lee at 11:38 PM No comments:

Email ThisBlogThis!Share to TwitterShare to FacebookShare to Pinterest
Labels: dreams

Lisa Shiel of Bigfoot Quest has a poll about a UFO/Bigfoot connection. Cast your vote!
Posted by Regan Lee at 6:36 PM No comments:

My recent piece: When Entities Collide on UFO Digest, on BF, shapeshifting, faery, etc.
Posted by Regan Lee at 9:53 AM No comments:

Hot on the trail of the elusive Big Foot

My people believe in Sasquatch. We do not require proof because we know he exists'

HARRISON LAKE, B.C.–Nepal has the Yeti. Scotland has the Loch Ness Monster. North America has the Sasquatch.

Sightings of these legendary creatures provoke fierce debate. Are they hoaxes, figments of overactive imaginations, culturally based metaphorical symbols or are they real?

Hoping to find an answer, we're sitting in Sasquatch Tours' high-speed jet boat on Harrison Lake, a two-hour drive east of Vancouver. The four-hour tour teaches about Chehalis' culture, highlighting their belief in the elusive Sasquatch, and includes a trip down Harrison River to a group of rare pictograms.

We gaze at the snow-capped, forested mountains ringing the lake while Sasquatch Tours' owner-operator Willie Charlie welcomes us to his Chehalis homeland.

Accompanying himself on a drum, his song reverberates along the 60-kilometre-long lake. It's a blue-sky day, and the drumbeat, songs and mountain views transport us to the realm of magic and mystery.

Rest here.
Posted by Regan Lee at 9:20 PM No comments: