Bigfoot Dropped off by UFO?

Tales of Bigfoot sightings and ufos and aliens, from Lon Strickler at Phantoms and Monsters:

Phantoms and Monsters: Pulse of the Paranormal: then the red eye appeared again looking at me and the dogs heading south thru the small wood between me and my neighbors house. It stood there for about 30 seconds and when I started to raise my light, the eye disappeared. to me it looked like a lizard's eye. It didn't seem in wanting to harm us so I didn't chase it. My question is I've been hearing reports about Bigfoot being dropped off or taken up in their space craft, suppose that's what the alien was looking for? (Phantoms and Monsters) 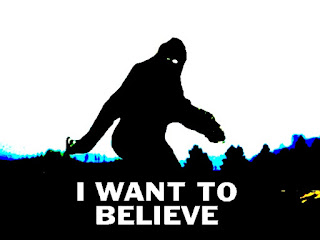 The War
I don't know any of the participants personally, though I have corresponded via blog comments with Steven Streufert in the past.  Nor am I a participant in this "war" between various Bigfooters. That qualifier done with, I am interested in this story concerning Dr. Johnson's paranormal-Sasquatch experiences, and those Bigfoot researchers who scream "No blasted damn WAY!!!!!!" So, the controversy. Bigfoot researcher team The Bluff Creek Project explored the area where Dr. Johnson says is the place where these paranormal events take place:


Bigfoot Evidence: Debate Rages On Between Warring Bigfoot Factions: “So for a while now we have been looking for Dr J’s Southern Oregon Habituation Area so we could visit it and debunk his supernatural claims. (Italics mine.)

The assumption on their part is that Matthew Johnson's claims are nonsense.

To be fair to the anti-paranormalers, they make the point that the area Johnson says is the supernatural Sasquatch hot spot is too close to the highway and houses for any Bigfoot to hang around. And the vortex Johnsons speaks of is probably caused by floodlights:


We investigated Adam Davies portal as well and we are sure we have that figured out. There is a house 3/4 mile away with flood lights on it that point up the ridge. You can see it when you look low through the trees. (Bigfoot Evidence.)


Dr. Johnson has responded, and Streufert promises to present more soon on this on his blog. According to Johnson, the Sasquatch have told him it's "Time to move on."

Bigfoot Evidence links to the entire article at Bigfoot Junction: Dr. Johnson's Feud with the Bluff Creek Project.  That blog entry makes it clear they think the paranormal-Bigfoot connection is ludicrous crap.

As I wrote at the beginning of this post, I don't know any of the people involved in this. I don't know if Johnson is full of it or not. As with UFO experiences of the odder kind -- telepathic communications, alien visitations, visits to other planets, giant owls, floating through walls, and oh yes, sex with reptilians -- there is that realm where the weird gets decidedly weirder. Those of us living in this realm frequently feel we have to take sides. Not just sides but firm and solid stances that avow YES! or, NO! Then there are those of us who've had our own weird experiences, (yep, like me) who don't know what to make of it, really, and maybe aren't ready to fully embrace the YES! side, but will not stand with the NO! side. And in no way be quick to snort and laugh and set out to debunk the weirder weird. (Because remember: there are those that think the most level headed salt of the earth no nonsense Bigfoot researcher-camper-hunter-outdoorsperson who spits on anything remotely suggesting a UFO/paranormal Bigfoot connection, is nothing more than complete loony tunes by many.  It's a loop of relativeness.)

Psychic-UFO-Paranormal Bigfoot: Oregon and Beyond
Tales of psychic Bigfoot, of Bigfoot as alien, or UFOnaut, or supernatural creature, are not new. Oregon alone has its share of strange Bigfoot lore. Stan Johsnon (deceased) self-published his encounters with Sasquatch on his Sutherlin ranch that included travels with Bigfoot in UFOs and telepathic communications. The story of "Flix", the white Bigfoot in Albany, Oregon in the early 1960s, included UFOs and psychic conversations between the creature and humans. (That's how we know his name was "Flix"; he conveyed that to the psychic who interviewed him.) Ida Kannenberg, author and UFO witness and channeler, co-wrote with Lee Trippet My Brother Is a Hairy Man and discusses telepathic communications with Bigfoot in the Oregon coastal range.

These tales of strange Bigfoot encounters exist, and exist well beyond just Oregon. As with UFO research, Bigfoot research cannot dismiss these encounters simply because they're too fantastic.


There is one more thing. Matthew Johnson, a psychologist, saw a Bigfoot in 2000 while hiking with his family. This sighting was a profound experience for Johnson, and "haunted" him for years. (I relate to this feeling; with me, my sighting of an orange orb UFO is something that has stayed with me all these decades, and is what brought me into this field.) Then something even deeper, more profound, and certainly weird, happened to Matthew Johnson. And that is the whole supernatural-vortex-paranormal thing happening now.

Rather than dismiss Johnson as a nut, or a liar, or the whole topic as worthless (even harmful to Bigfoot research, some will say) let's look at the pattern.

Transformations: Changes in the Pattern
Witness Johnson sees a Sasquatch, something that very deeply affected him. Years later, his experiences continue, and transform. They transform from a simple sighting -- if you can call seeing a Bigfoot "simple" -- to the other wordily. The question is, of course, a big huge screaming Why?

Is Johnson's long term relationship the catalyst for the weirder events he's reported? Is there a symbiotic dance that has to occur between human witness and Sasquatch in order to experience the highly anomalous?

Yes, the other obvious questions should be addressed as well. For example, is Johnson off his psychologically trained rocker? Is he a liar, a hoaxer?

But who's to judge if he's "crazy?" The liar/hoaxer element should be clear enough to prove. The rest is much harder to get at it, and much easier to ignore.

When Was Your First Time?

When was your first time hearing about Bigfoot? Not seeing a Sasquatch, but the first time you heard that such a creature existed.

My first time was when I was in my early teens -- roughly 1968. I think it was an episode of You Asked For It, where the program aired some of the Patterson footage. But I can't find a source for that, and it's possible I'm hazy on that memory.  (The dates for that program were: 1950 to 1959, with later incarnations in 1972, 1981, and 2000.) I do have a memory of watching a newsreel of the Patterson footage in the early 1970s when I worked in a movie theater. (Bigfoot on the big screen!)  So, in my teens if not earlier, was when I first became aware of the existence of Bigfoot.

I remember two stories from my teens about Bigfoot. One, from my brother, who insisted close friends of his who were camping in Northern California, were awakened at night and heard a large creature throwing oil drums at them. My brother was convinced, as were his friends, this was not being done by a bear. Both my brother and I were in our teens, so who knows if he was teasing me or not.

The other story I heard, again in my teens, was about Bigfoot living in the Topanga Canyon (California)  area, as I wrote for Tim Binnall's site, also here. As I wrote in those articles, I'm not that sure the people telling the stories actually believed them. They were just passing along a good story; more of a FOAF (folklore term: "friend of a friend")  tale, regardless of belief factor.

For myself, however, I believed back then that Bigfoot exists. And I still believe it.

Something most definitely lost in translation here:

Regan Lee On The Paranormal Bigfoot by Marlaina Lucas: Regan Lee On The Paranormal Bigfoot:
At her "Trickster's Go ashore" border at "Binall of America", Regan Lee says: "The statement of charm Bigfoot' and creepy or paranormal phenomena amid other unknown creatures is synchronize for some to encompass mischievously. (It was for me, at first, heaps duration ago.) But go deeper, and you'll drop something fixed stranger: some classify of uncommon connection along with hazy military, paramilitary, scrutinize control and psy-op factions and outlandish creatures, such as Mothman, Bigfoot, and others." (UFO Brief Case.net)

My column at Tim Binnall's site is Trickster's Realm, but I do like the jaunty idea of trickster's going ashore.

Found this, from October of 2014 :Bigfoot at Mount Rainier? - CSI, by debunker Joe Nickell. Thought it funny he's cited this blog in his notes on the article, which, of course, pulls about Bigfoot, "proving" it to be a fantasy. Still.
Posted by Regan Lee at 12:03 AM No comments: