I love this Sasquatch artwork. I don't have a source for this -- I would like to give the artist credit. This was found on tumblr without a citation. 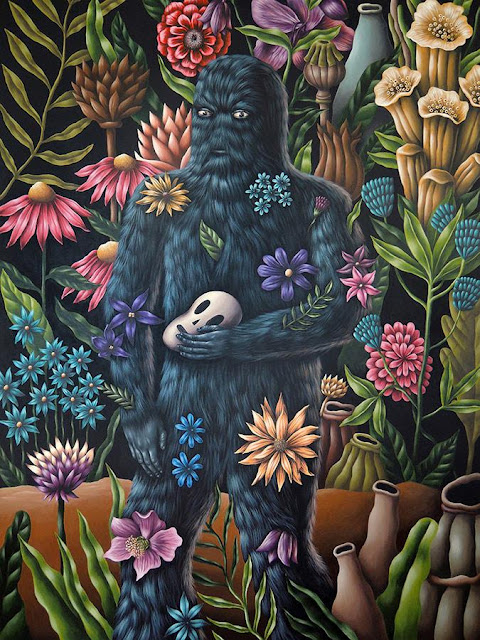 Email ThisBlogThis!Share to TwitterShare to FacebookShare to Pinterest
Labels: art

Milissa Hovey has a new post at her Search for Bigfoot blog about female Bigfoot researchers. In her current post she interviews researcher Adrianne Brashear Arney. I like the following:

The Search For Bigfoot: Women in Bigfoot Research ~ Adrianne Brashear Arney: Follow up: There are people, like myself, who are not "believers" simply because they haven't had a sighting. While I think your thoughts on this are well thought out and you obviously know how to make a well informed decision, others will not agree. They will say, "how can you believe Bigfoot is out there when you haven't seen it."
What would you say to those people?

Adrianne: I have hiked all over the hills in Kentucky ever since I was a child and I have never seen a bear or bobcat while hiking. But because I have never seen one doesn't mean they are not there, because they are! I have seen a Black Panther but according to KY forest rangers they do not exist there! (The Search For Bigfoot, Melissa Hovey)

I relate to this -- I haven't seen a Sasquatch myself, but I believe those many individuals who have shared with me their sightings and encounters.
Posted by Regan Lee at 6:48 AM No comments:

Sharon Day at Ghost Hunting Theories has   post about spook lights and Sasquatch. What is the connection (of course, assuming there is a connection.) Sharon suggests something different and counter intuitive for those out in the field searching for the answer.

Ron Morehead was on Coast to Coast last night, with host Connie Willis, (one of my favorite hosts.) Morehead had a lot to say about "paranormal" Bigfoot, though, as he said, he doesn't like the word "paranormal" in general. But the stranger side of Sasquatch certainly exists, and Morehead has experienced many interesting encounters. He's also collected vocalizations, which can be heard at the Coast to Coast site.

Speaking of Morehead's collection of calls, they sound very much like other Bigfoot calls I've heard recorded from other places in the U.S. Seems the specificity of these sounds would be hard to hoax.
Posted by Regan Lee at 3:49 PM No comments: